SKY REMAINS BLUE: EVERTON WE NO ENJOY THIS DRAW SOUP WEY YOU SERVE US O

By admin On Dec 24, 2017 1,701 0
Na wa o for this Christmas period wey na JELLOF rice people dey serve their visitors, Everton settle down serve us Hot Ogbono soup with Starch..only God know wether Sam Alladyce na warri man. Wetin him tell him Players wey dem come begin use all their body play Chelsea like this i know fit shout!..
The Kind Bus wey dem park ehn , i swear “The young shall grow motors” no get am..but last last..Everton never score against Chelsea for their last four games so we sabi pass them.
Despite having almost seventy percent possession all through the game,Chelsea failed to find the back of the net as they played out a frustrating goalless draw against a resurgent Everton side under the tutelage of Sam Alladyce.At first it was looking like the champions will eventually get the breakthrough but just could not deliver that final touch even with Eden Hazard’s and Willian’s dashing runs into vital areas. 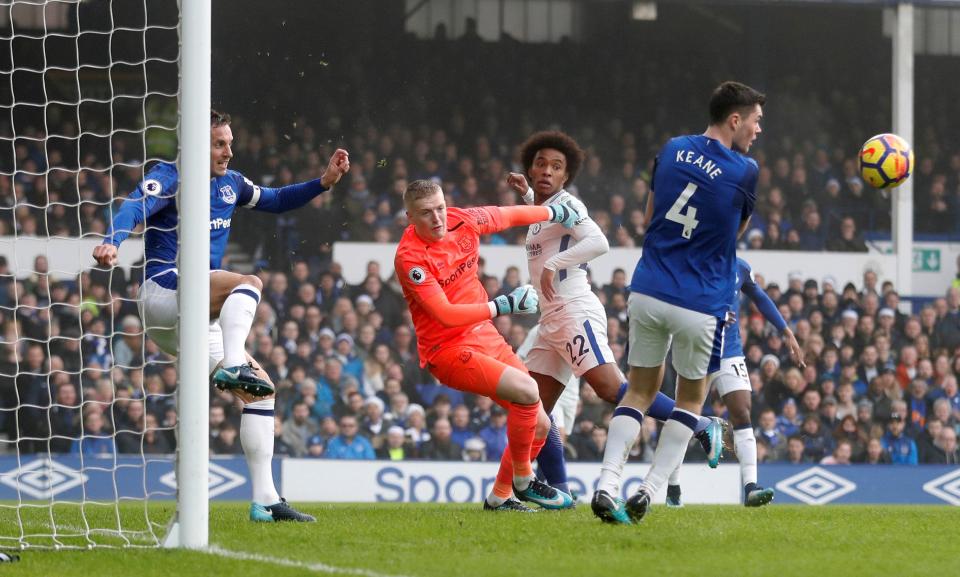 Chelsea did all they could but could not break the deadlock
Alvaro Moratta’s unnecessary celebration after scoring the winning goal at the death against Bournemouth in the Carabao cup meant he would miss the game at Everton due to accumulated yellow cards so Antonio Conte once again deployed Hazard to play as a false nine with Willian and Pedro out wide.Antonio Rudiger was preferred to Captain Gary Cahill so Ceaser Azpilicueta captained the team.
Everton had to take in all the pressure from the Chelsea’s front men from almost start to finish.The most glaring effort for Chelsea before the break was when Jordan Pickford palmed away Pedro left footed drive off a Bakayoko pass after the midfielder broke lose from the centre circle,the English Goal tender was outstanding as he kept Chelsea at bay with saves upon saves.
The second half was not particularly different from the first for the blues as they kept pressing for that vital goal. Alladyce Obviously saw the threat and brought in former Swansea city centre half Ashley Williams to the rescue.The Welsh man almost got an own goal when he deflected a Victor Moses cross onto the crossbar, with Luck coming to his rescue.
Conte felt Chelsea was lacking a centre forward and brought in Michy Bashuayi with Pedro coming off but still to no avail as it wasn’t just Chelsea’s day. its amazing how Chelsea had twenty-five shots(The most in a premiership game since 2014) and still couldn’t find the back of the net,but then again the “All Man behind the ball” approach employed by Everton in the last twelve minutes just frustrated the champions the more.Everton had a shot on target but Michael Keane’s header went over the bar at the very last minutes of the game, a relief for Conte.
Flogging..
I watch the match jeje and all my boys kpef..Na Everton know wetin dem park for front of goal.
7/10 for dem but next match we must win o..
We are the pride of London!
We are blues!
Continue Reading
chelseaEPLeverton
0 1,701
Share

COMMON QUARRELS COUPLES HAVE AT CHRISTMAS AND HOW TO AVOID THEM

I dey hospital..dem dey give me drip..Chelsea don kill me