It was billed as one of those block buster Movies. The Homecoming of the Legend. All the pre-match talk was about the reception Wayne Rooney will get once he steps onto the pitch at his old stomping ground Old Trafford. Everton have been in wretched form  lately can’t score and can’t defend shipping in Goals left right and centre. Be it Premier League opposition or Europa League. The Much earlier season promise they flattered to deceive us with has gone up in smoke as all the new signings are not coming through.

Wayne got the good reception he deserved. He’s a Legend at Old Trafford cant take that away from the man. But on this day his ex-team mates did not spare his team from the rod.

ANTONIO VALENCIA who doesn’t get many goals for us, hit a worldie to commence the spoiling of Wayne Rooney’s homecoming party before Jose Mourinho’s side ran riot at Old Trafford towards the end of the game

Full-back Valencia last scored one here in January 2014, but it was worth the long wait for his next. What a goal it was, if you haven’t seen it. Wow..what are you doing? 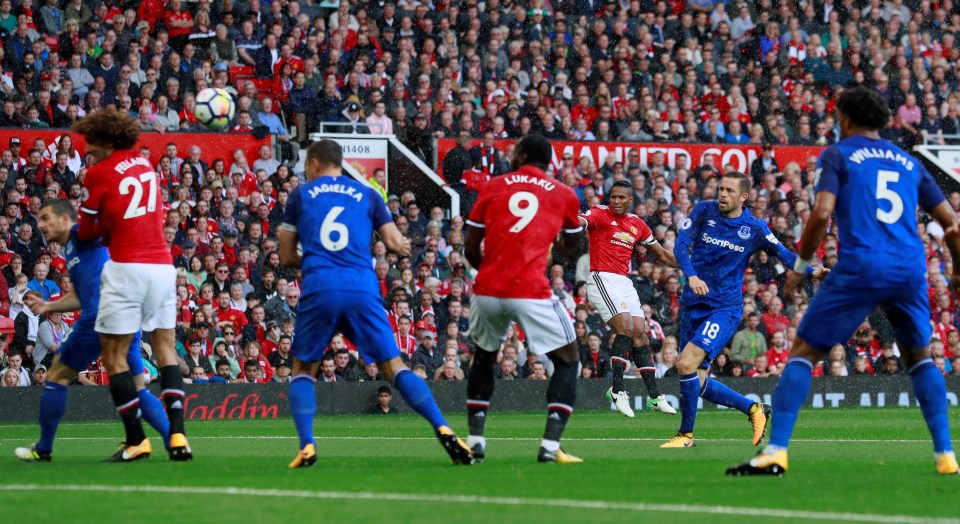 The game was just four minutes old when Nemanja Matic sprayed a ball across field presumably for Valenica to create something himself.

But it became clear he had one thing on his mind as he refused to break stride and latched onto the ball with perfect timing to send a 20-yard angled screamer curling past Jordan Pickford.

Sometimes you just have to hold your hands up. Pickford did to be fair but the ball had so much pace and spin on it that his efforts were futile.

That, you would have thought, would have opened the flood gates for a comfortable afternoon for United.

After all Everton arrived here after three sound thumpings without scoring a goal.

United’s tails were up having gone into the weekend as league leaders and with an opening Champions League group game win under their belt.

But after Lukaku missed a great chance on 26 minutes to wrap the game up, We contrived to take our foot off the pedal and it almost cost us. This is the exact same thing the manager was complaining about after we thrashed Basel in the UCL. Looks like no one paid attention.

David De Gea has been largely a spectator this season but the Red Devils needed him at his brilliant best again yesterday as he denied both Rooney and Gylfi Sigurdsson.

Juan Mata did respond with a a free kick that came back off the post.

Rooney received a good reception both before and at the end of the game when he was subbed off. And He deserved it..Been a fantastic servant for us and his record here will take some breaking.

What he really wanted was a point or three for Everton but this time the script writers of his incredible career had to deny him.

And in the end Lukaku did manage to make it safe with seven minutes to go.

Marouane Fellaini cut out a clearance and the ball bounced to Lukaku who fed Mkhitaryan to finish.

Lukaku, who had been booed by the Everton fans turned to them and put his finger to his lips to shussh as he got the third.

Anthony Martial then netted from the spot in injury time to complete the rout after Morgan Schneiderlin handled in the box.

Both matches last season between these sides finished 1-1. There has never been three straight draws between the sides in the Premier League.Manchester United showed their versatility by having their seventh different goalscorer in the Premier League this season, more than any other team.No hard feelings between Mourinho and Rooney. The United manager reached out to shake the club’s record goalscorer’s hand as he came off in the 82nd minute and was duely Obliged.

So we go joint top with the noisy neighbours and look just as impressive goalscoring wise. Cant wait to meet them and put this matter of who is the top dog in Manchester to rest.

GOLOVKIN AND CANELO ENDS IN A DRAW AMIDST ACRIMONY