Great to see the team start of the New year with a Win. After what seems an Eternity, 3 straight back to back draws had dealt a serious blow to Our title Chances if not completely obliterating it. But last night we silenced the haters. The pre-match talk had been of internal rifts , Manager having lost the dressing room and all that. To the point you start to think do reporters want to make sport look like reality TV shows or what? can’t they just keep the talks restricted to the issues that matter. Like tactics, formations, game stats .must drama feature in sports?

Any way away from all that..

Martial claimed his fourth goal in six appearances against the Toffees with a superb curling shot to round off a lightning counter attack.

And the in-form Jesse Lingard  added a second to lift United back up to second place.

The opening goal came after a mistake by Wayne Rooney United’s record goalscorer after hitting the net 253 times for them in between his two spells with Everton.

He failed to get off a shot as Everton committed men forward for a change, and United stormed upfield, where Paul Pogba’s slide rule pass found Martial – who gave Jordan Pickford no chance.

That came after 57 minutes, and Everton could not say they had not been warned

United clearly raised the tempo after an even first half, and Juan Mata had just hit the post with another swerving effort.

United have won every game when they have scored the first goal this season, and they made certain that run would ciontinue when Lingard grabbed his tenth goal of the season with a fierce 81st minute shot.

The result means Sam Allardyce has still not beaten Jose Mourinho in 12 attempts, although it always looked like a draw was the best he could have hoped for this time after making no fewer than seven changes.

That seemed to be a bit of an over-reaction to Everton’s first loss under his management, their 2-1 defeat at Bournemouth. 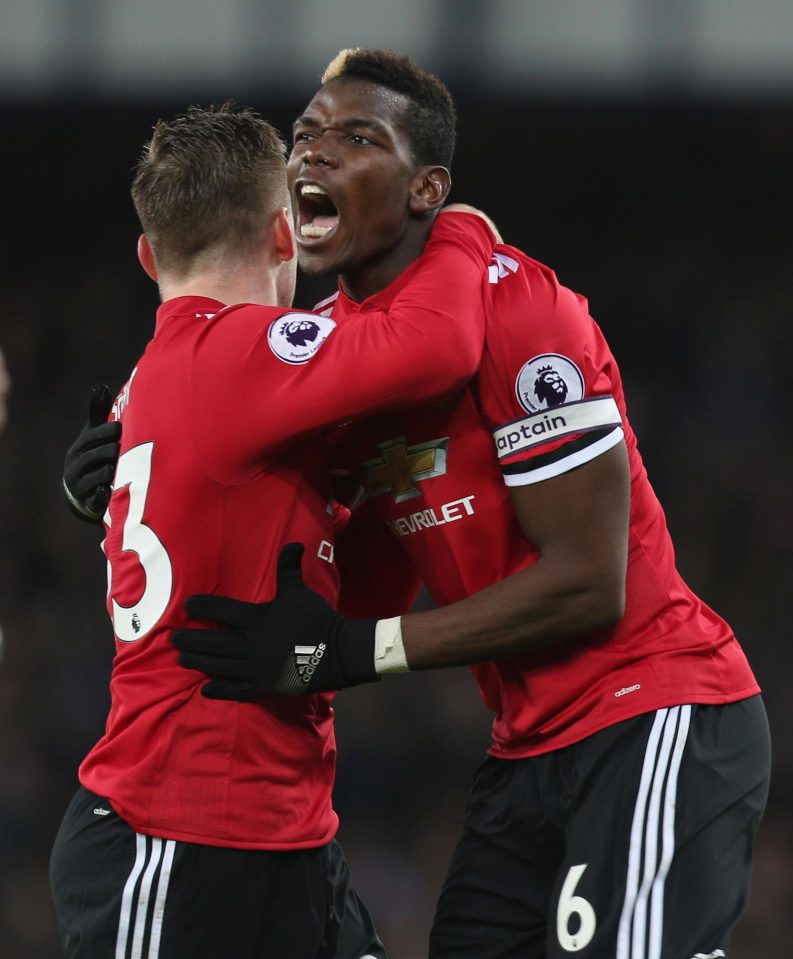 Pogba and Luke shaw were impressive

But Allardyce said it was purely down to fatigue among his first team regulars, and admitted it was “a bit of a calculated risk”

It did not seem that much of a gamble against a United side who showed precious little attacking event while drawing their three Premier League previous matches, on top.

With Romelu Lukaku denied a return to his old club after suffering a head injury in Saturday’s lifeless stalemate with Southampton, United also went in without a recognised striker.

Martial was pushed up front, and was clearly licking his lips at the prospect.

It was Mata and Jesse Lingard- with six goals in his last eight outings – who provided most of United’s best moments.

Everton had their own threat in the form of the pacy Yannick Bolassie, who seemed capable of zipping past Victor Lindelof at will. But David de Gea was typically assured when dealing with his crosses.

Marcos Rojo also reacted brilliantly to prevent Oumar Niasse pulling the trigger in a rare Everton raid, while the Sengalese striker also went closest to snatching a goal with a header that just flashed past the woodwork.

So now we have broken the draw soup menu can everyone just get off our backs ..