It was the version of Arsenal we fans like to see. Crisp football, Assured in possesion, Dangerous on the break, and entertaining. The men from North London wasted no time in letting their Hosts know they meant business and were in town to get 3 points. The game against Watford had led to many very harsh comments passed on the team so it was a nobrainer they would want to put criticisms like the one that came from Troy deeney of Watford to bed.  Much had been said about Arsenal’s season unravelling after that Watford game. There was talk of infighting amongst some players who felt others cost them that game but yesterday they put all that aside to hand Koeman another nail to his coffin. Mesut Ozil who missed a great chance against Watford late in that game to win it for us appeased any disgruntled fan with a 5 star performance.The German star who is heavily linked ManUnited in January showed his more brilliant side, opening up the defence of Everton at will with mad skills and passes.Ever ton came in to this game Prior to kick-off, the Toffees having won just two games in 12 games in all competitions this season. A team really struggling but the gunners were not in the compassionate mood. 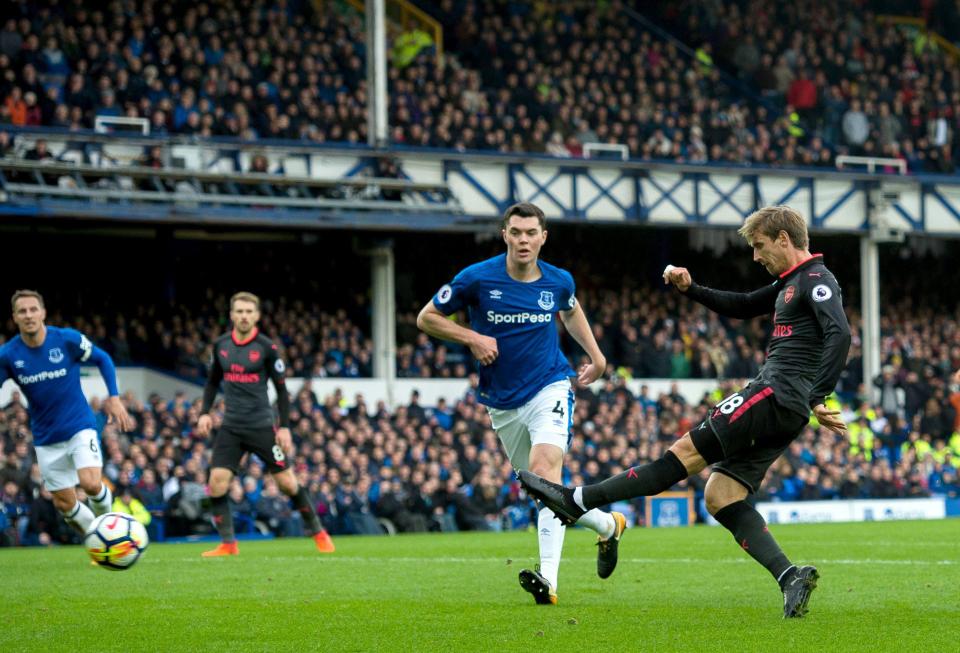 The German World Cup winner, as revealed by SunSport, is unhappy over what friends call a “campaign” against him with his contract due to expire this summer.

There were suggestions that he had already told team mates that he will be off to Manchester United next summer.

But 90 minutes before kick – off he posted a tweet that read “Ignore the noise and stay focused”.

And he followed up that statement of intent with the goal that sent the Gunners to victory as Wenger celebrated his 68th birthday.

Rooney, who announced himself to the wider football world with his glory winner against the Gunners 15 years ago, grabbed more glory just 12 minutes in.

Just like back in October 2002 he unleashed a wonderful right footer that flew into the top corner.

But by the end Everton, reduced to ten men after Idrissa Gana Gueye was shown a second yellow in the 68th minute, were in disarray and the Everton faithful were calling for boss Ronald Koeman’s head.

Things were a lot, lot better for Ozil and his mates who had begun the game letting fly at Toffees goalkeeper Jason Pickford from all angles.

He stood up to the barrage until being beaten by Nacho Monreal’s deflected 40th minute equaliser.

Ozil, who had dazzled at times in a brilliant all – round attacking display by Arsenal, then headed his first goal of the season in the 53rd minute.

Once Gueye had gone the Gunners were free to run riot and Ozil’s perfect pass made it a simple job for Alexandre Lacazette to score his first away goal since his £60million arrival in the summer.

No4 – to nobody at Goodison’s real surprise – arrived in the last minute, Aaron Ramsey sweeping his shot home as under pressure Koeman saw his side slump to third bottom of the Prem.

Four minutes into time added on Monreal left his back-pass way too short to Petr Cech and sub Oumar Niasse but the deficit before Sanchez scored his first of the season after jinxing past 3 Everton defenders and firing a shot low past pickford.

So we move to 5th position and 9 points behind the league leaders. The combo between all our front forwards was a delight. Whether that is a function of their Talent or just the fact that Everton are that Bad time will tell especially when we play Mancity in 2 weeks.

THIS ONE NO BE FOR WORSE , NA FOR BETTER FOR PUNCHING BAG

Ygm in your hood