The German defender netted his first goal for the blues ..a superb header in the first half at Stamford Bridge, while the Brazilian winger wrapped up the victory in injury time, before Dominic Calvert-Lewin scored a consolation goal.

Everton bgan life after Ronald Koeman in as much the same as when he was in charge. 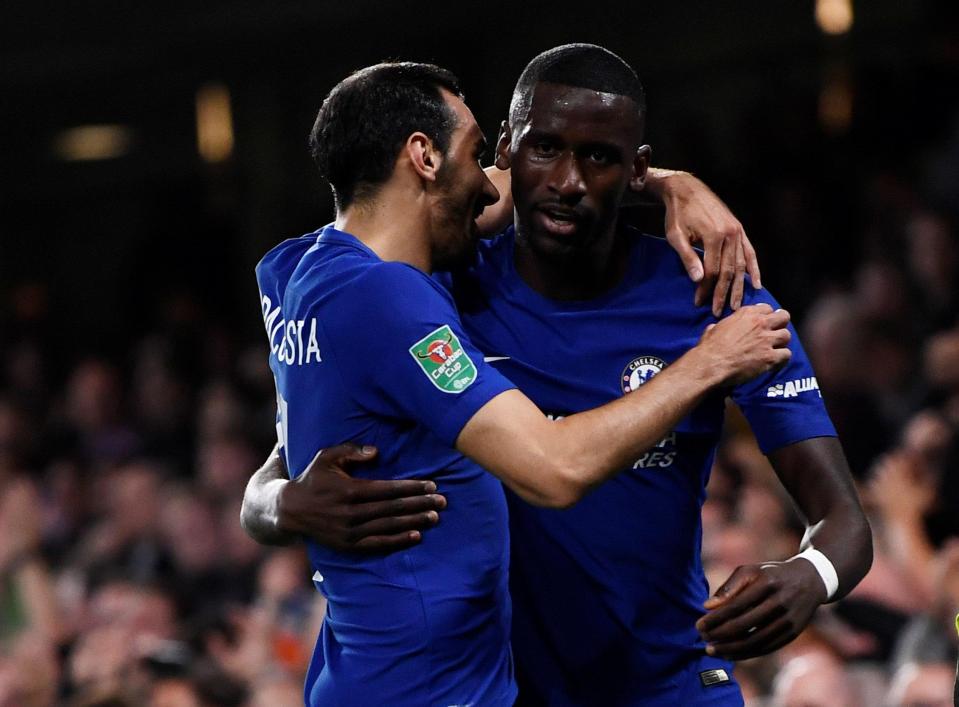 Despite a major second half improvement and having plenty of chances, Everton continue to lack a killer touch and there will not be many teams fearing them, regardless of who they put in charge.

Instead, it was Antonio Conte – attempting to avoid the same fate as Koeman – who made it through to the quarter-finals of the Carabao Cup.

Defender Antonio Rudiger, a £29million summer arrival from Roma, scored his first club goal since a 3-0 win over Chievo in Serie A in May 2016.

And so David Unsworth, in his second spell as caretaker manager, will now prepare for Sunday’s trip to Leicester to face Leicester City,

Whatever they managed in west London – and they did deserve a bit more – you have to wonder whether it would have helped Unsworth. A half-time team talk certainly made a difference as Everton were the superior team.

Due to his keenness to impress the club’s owners, it was no surprise that Unsowrth went with a strong side. He made five changes to the team that lost to Arsenal 5-2, the result which tipped Koeman over the edge.

Teenager Beni Baningime filled in for Idrissa Gueye for his debut. There was also a first start to the season in midfielder for James McCarthy while Aaron Lennon – despite having featured as a sub – started a game for the first time since his personal problems last season.

In contrast to Everton’s approach, Rudiger and Gary Cahill were the only survivors from Chelsea’s 4-2 win over Watford.

Danny Drinkwater, fit again after a groin problem, made his debut since arriving from Leicester for £35million and as you would expect, looked a bit rusty. It was no great surprise when he was substituted for Cesc Fabregas in the 62nd minute.

Midfielder Ethan Ampadu made an encouraging his first start after joining from Exeter and appears to go to the same hair salon as David Luiz.

The first effort on goal – and that took 13 minutes – came courtesy of Rudiger. Yet it was spectacularly bad shot which sailed into the top tier of The Shed and nearly hit one of the floodlights below the roof.

Rudiger then proved he is a far better finisher with his head to open the scoring.

Charly Musonda, who has used social media to moan about his lack of chances at Chelsea, was being given a rare chance and received a short corner from Willian before sending over a far post cross to Rudiger.

Quite where the Everton defence was is a mystery, but certainly none of them were near the Chelsea centre half and he sent a looping header across Jordan Pickford’s goal and into the corner.

Chelsea’s number two keeper was guilty of an embarrassing mistake by passing the ball to Lennon but he took a poor first touch and failed to score what should have been a goal.

The former Manchester City keeper showed decent reflexes to punch clear a glancing header from Phil Jagielka and then did well to save from Kevin Mirallas.

Sub Ademola Lookman looked lively and had two decent chances – the second one hitting the bar – but his team could not get the goal they deserved.

Chelsea were awful in the second half but with 12 minutes left, Michy Batshuayi should have scored but after forcing the ball past Pickford, was beaten to the tackle by Jagielka when he looked certain to nudge the ball into the net.

There was a bizarre end to a generally forgettable game.

Two minutes into injury time, Willian played the ball inside to Fabregas who delivered a fantastic touch into the past of the Brazilian – and he shot across the goal and into the net via a post.

Yet Everton finally got a goal 60 seconds later, even though it was too late.

Oumar Niasse showed some guts by blundering his way past Rudiger and Cahill.

The ball then fell for Dominic Calvert-Lewin who steered the ball past a wrong-footed Caballero.

Had that goal levelled the tie and sent it to extra-time, you would have fancied Everton.

IHEANACHO OPENS HIS ACCOUNT FOR LEICESTER WITH FIRST GOAL VS LEEDS

I dey hospital..dem dey give me drip..Chelsea don kill me