Last weekend when the Manchester Rivals United and City clashed was when some of us thought the Title will be wrapped up. The Derby lived up to its Hype and served up a 5 goal thriller with Manchester United Emerging shock Victors on that Occasion. It meant Manchester City had to tarry for a few games to win the Coveted trophy. This weekend they brushed Tottenham aside at Wembley to remain on course to lifting the Premier League but unexpectedly their Bitter Neighbors did them a Favor by Losing to Westbrom in their own League fixture at home.

Because Manchester United lost bizarrely at Old Trafford, ManCity’s 16 point gap over the 2nd placed team cannot be caught any more with just 5 games left and are now Premiership 2017/2018 champions.

And he has urged City to build on their title triumph.

The Belgian added: “I’ve never been able to retain a title and I want to see if this team has it to be even more successful.

“I want to see how we react now next season.

“This is not a dynasty, it is one title. We are all delighted but there is a lot more to do to unlock our full potential.

Manchester United  on the other hand were made to feel the humiliatio of Having Gift wrapped the Title to their bitter Rivals.

In the game against West brom it was Jay Rodriguz’s Header in the 73rd Minute that set the title on its way to the blue half of Manchester. 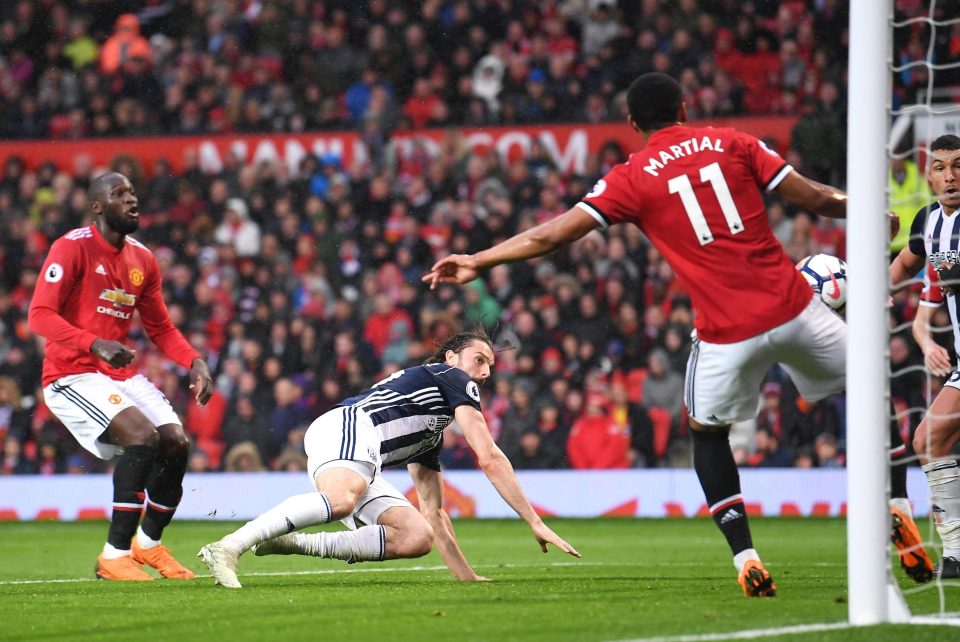 Rodriguez on target at Old trafford.

United who last weekend impressively stopped their rivals from clinching the Prem championship eight days earlier with a comeback 3 – 2 victory at the Etihad.

With City’s 3 – 1 win over Tottenham on Saturday night United would have had to lose against doomed West Brom to stop delaying the inevitable, and thats exactly what happened

Yet as Paul Pogba was hauled off in the 59th minute having backed up a two – goal display at City with a terrible performance against the Baggies.

The United midfielder rose to try and clear a Chris Brunt corner but succeeded only in setting Rodriguez up for a chance he could not miss.

The Baggies, who arrived at Old Trafford having won only three Prem games all season, gave United a serious fright twelve minutes in as Jake Livermore demanded a sharp low save from David De Gea.

City are worthy Champions though and the debate is on currently if they are the greatest champions of the last 20 years ..Questions are being asked if they are better than the Arsenal Invincibles, or Chelsea’s 2004/2005 winners or even the all conquering Manchester United Treble winning team?

which ever you chose you cant take anything away from Guardiola’s men, they have bossed this season completely and are Number 1 in ENGLAND,

NPFL ROUND UP: RANGERS FALTER, BUT RIVERS UNITED& ELKANEMI SHINE